I am so lucky to have seen Al perform many times and considered him a friend. I photographed him lots of times whilst he was performing and had immense fun doing it. What a character he was.  I was really upset when he passed on to “a gig in the sky” he was far too young to leave us. My sympathies did and still go out to his family especially, Pam, Jodie and Luke. His number one son (only) Luke now sounds and looks like his dad.
Below you will see a poem especially written by Cornish Born Poet Ruth Tremayne Netter.
This is followed by an article written by the cornishnationalmusicarchive.co.uk with Luke’s help.
But first click here to get a copy of Leo Sayer’s very recent reworking of Al’s Tradewinds recorded with some of Al’s friends.

How to pay tribute to such a star
Beloved by those he knew
Musician, husband, father, friend
His fame and following grew

A Cornish man, a Cornish heart
He loved to entertain
Worldwide success could never dim
His passion, that remained

He played guitar, he sang and wrote
His talents were immense
Committed to his fans at home
His love for them intense

“Wazzon” he cried to those he loved
And they would all respond
A deep connection, heart to heart
Together they belonged

He’ll be remembered, there’s no doubt
By family, fans and Stars
The Mechanics brought him fame but yet
He loved his solo gigs in bars

His voice, his charm, his talent lives
His albums will endure
We never will forget you Al
You’d say “Get On” for sure!! 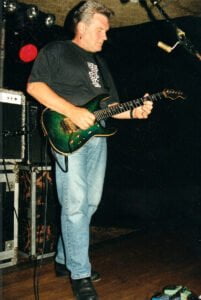 Al Hodge was an internationally known guitarist, singer, and composer. At the age of 13 he made his debut with a solo performance of the Shadow’s instrumental “foot tapper” in front of the entire school at Bodmin Comprehensive. By the age of 16 he was lead guitarist for popular Cornish band “The Jaguars” with regular gigs at clubs like the Blue Lagoon at Newquay and the Flamingo at Redruth.  On leaving school he famously decided that “wanting to be a painter and decorator wasn’t going to be as much fun as touring with a band” and joined another Cornish band “The Onyx’.  Al toured with the band in the U.K. and Europe for several years, with regular performances on Radio One and 7 singles recorded on the PYE label. He returned to Cornwall in 1970 and joined Bodmin based band Ginhouse.

When the Sawmills studio at Golant was set up in the early 70s Al was invited to work as a session musician eventually forming the house band with drummer Alan Eden and bassist Dave Quinn. Sawmills was one of the first residential studios in the UK, it was quite iconic in that it was only accessible by boat and then only at high tide unless you were to brave the China Clay mineral line and jump out of the way of oncoming locomotives. Al was part of the package that made the studios a world leader and in demand with the top performers. All of which ensured his reputation as a top-level musician and composer and he remained in demand across the spectrum of popular music including film and television for the rest of his career.

n 1978 the Sawmills session band launched themselves as the Mechanics which for many Cornish fans have defined the story of “Big Al Hodge”. The Mechanics were an immediate success, they appeared on the legendary 101 club albums with leading performers of the time and signed a recording deal with Bronze records. In 1980 the Mechanics teamed up with Leo Sayer’ to form his backing band joined him for 2 world tours and featured on many of his albums. Regular exposure on the long running TV series “This is Leo” made Al and the Mechanics a household name.

Al returned to work from home in Bodmin, Cornwall in 1985 with an established reputation that set the scene for the next 20 years. There were tours, gigs and session work with an almost endless list of top names such as Elke Brook, Toyah Willcox, Sad Café, Randy Crawford, Linda Ronstadt, Clifford T. Ward and Suzi Quatro. His success as a songwriter was not limited to his own bands, “Rock and Roll Mercenaries” for example was a hit song recorded by Meat Loaf. Al was also in demand as a composer writing theme music TV shows like Carlton’s “A National Heritage” and film scores including the Cornish film ‘Prime Fillet’ screened at the cornwall film festival in 2003.

Despite this world class background Al remained loyal to his friends and fan base in Cornwall, teaching the guitar, gigging at local venues as a solo performer, a variety of bands and the occasional Mechanics revival. You could be standing next to Al as he shouted “wasson” during his one man show at a packed Bodmin pub completely unaware that a couple of days later he would be on main stage in the spotlight with Suzie Quatro.

Al may have lost his personal fight with cancer in 2006 but his music remains with us and his legacy of rock music in Cornwall continues to grow. The first “Alstock” festival was held at Bodmin Footbal Ground in 2007 and has since become the highlight of the Cornish rock band calendar.  His Cornish fan base continues to grow and with the help of social media previously unknown recordings are coming to light along with the photos and memorabilia that make “Big Al Hodge” and indelible part of the Cornish rock music landscape.

PrevPreviousSteve Winchester’s – “Songs of the Sea” All the songs are about Cornwall.
NextTales Of Twickenham – A blast from the past by Terry HarryNext